You are in the process of creating a booking for a specific quantity of passengers, due to system restrictions, each booking should contain the same number of passengers travelling, Would you like to start new booking?

are you sure you want to delete this itinerary?

No services in your itinerary, You are now redirected to the home page

Scroll Down in order to accept

You do not have enough credit.
Click to payment.

We Are sorry, it seems like there is no flights in the dates you have chosen

One of the ancillaries is no longer available, please try again

One or more of the flights have reached the maximum capacity of infants allowed on board, please try another flight

Please check that all of the details are correct, and fill the missing ones

You can't book return before departure

You already have a flight in your itinerary.
How would you like to proceed?

Please note, click on will delete all the flights and ancillary in your itinerary and replace it with your new choise!

Your session expired, You will now be redirected to the home page and you can start again.

Dear customer, this booking has inconsistent number of passengers, redirecting to homepage

There is an issue with this booking, please contact the airline

A pair of fish eagles guards the gentle bay their distinctive black white and chestnut feather pattern gleaming boldly in the morning sun. Suddenly, the birds toss back their heads in a piercing evocative duet. On the sandbank below, a well-fed monster of a crocodile snaps to life startled from its nap. It stampedes through the crunchy undergrowth, crashing into the water in front of the boat invisible except for a pair of sentry-post eyes that peek menacingly above the surface to monitor our movements. Tasty tilapia form the staple diet of the yellow-spotted otters that frolic in the islands rocky coves, while rapacious Nile perch, some weighing more than 100kg tempt recreational game fishermen seeking world record catches.
Rubondo is more than a water wonderland. Deserted sandy beaches nestle against a cloak of virgin forest where dappled bushbuck move freely yet silent through a maze of tamarinds, wild palms and sycamore figs strung with a cage of trailing taproots. 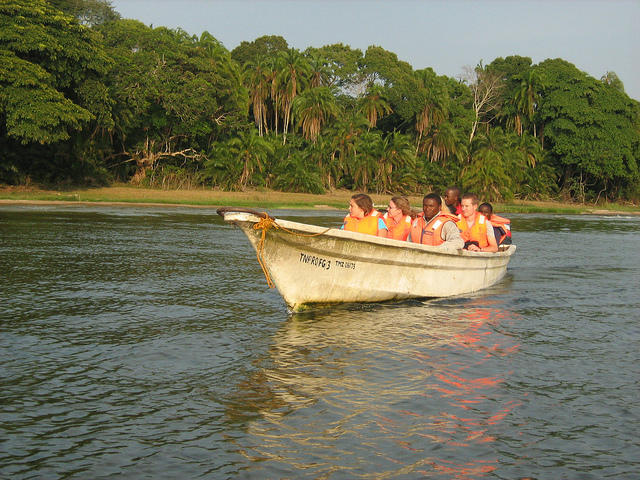 The shaggy-coated aquatic sitatunga, elsewhere the most elusive of antelopes is remarkably easily observed not only in the papyrus swamps it normally inhabits, but also in the forest interior.
Birds are everywhere.

Flocks of African grey parrots released onto the island after being confiscated from illegal exporters screech in comic discord as they flap furiously between the trees.

The azure brilliance of a malachite kingfisher perched low on the reeds competes with the glamorous flowing tail of a paradise flycatcher as it flits through the lakeshore forest. Herons, storks and spoonbills proliferate in the swampy lake fringes, supplemented by thousands of Eurasian migrants during the northern winter.

Wild jasmine, 40 different orchids and a smorgasbord of sweet indefinable smells emanate from the forest.

Ninety percent of the park is humid forest, the remainder ranges from open grassland to lakeside papyrus beds.

A number of indigenous mammal species - hippo, vervet monkey, genet and mongoose - share their protected habitat with introduced species such as chimpanzee, black-and-white colobus, elephant and giraffe, all of which benefit from Rubondo's inaccessibility.

Getting there
Scheduled flights and Chartered Flights from Mwanza with Auric Air Services Ltd.

Condition, minimum 2 pax to be booked